Playing online casino Malaysia through Alibaba33 online casino Malaysia can be a fun and rewarding experience for those who enjoy playing games for fun. https://mch.mc/wp-content/uploads/2014/12/ewallet_slot_casino_malaysia_duitnow_tng_mega888_918kiss_kiss918_pussy888_lpe88_qtech_wbet_clubsuncity2_newtown_apk_rollex11_king855_judi/Bet on your favourite slots, live, sporting events and win big! If you enjoy sports, slots like Mega888 ewallet Alibaba33 online casino Malaysia has something for you https://mch.mc/wp-content/uploads/2014/12/ewallet_slot_casino_malaysia_duitnow_tng_mega888_918kiss_kiss918_pussy888_lpe88_qtech_wbet_clubsuncity2_newtown_apk_rollex11_king855_judi/.

Playing online casino Malaysia through Alibaba33 online casino Malaysia can be a fun and rewarding experience for those who enjoy playing games for fun. https://mch.mc/wp-content/uploads/2015/05/Mobile_Slot_Game_Malaysia_Playtech_Live_Casino_Trusted_Betting_Gambling_Poker_SCR888_XE88_APK_IOS_Download_Esports/Bet on your favourite slots, live, sporting events and win big! If you enjoy sports, slots like Mega888 ewallet Alibaba33 online casino Malaysia has something for you. https://mch.mc/wp-content/uploads/2015/05/Mobile_Slot_Game_Malaysia_Playtech_Live_Casino_Trusted_Betting_Gambling_Poker_SCR888_XE88_APK_IOS_Download_Esports/

THIS EVENT HAS NOW ENDED

View the recap of the event

(NB: all events take place within the city of Derry/Londonderry; when searching for directions to the campus, please ensure that you input ‘Ulster University, Magee campus’, as Google Maps and others default to another Ulster campus over an hour away!)

One of the reasons we value sound as a perceptual and phenomenological event is that it allows for the creation of new types of sensory engagement with space. Creative processes of sounding allow us to design different types of sound worlds; places which can become autonomous zones. Lefebvre, in his seminal text The Production of Space, alludes to the concept of autonomous zones or imagined spaces; places which are imagined and created by community.

The idea of how we create and respond to autonomous zones is the subject of this year’s ISSTA festival as it comes to Northern Ireland for the first time, fostering a range of artistic, technological and academic interventions in Derry/Londonderry entitled Temporary Autonomous Zones 2016. A Temporary Autonomous Zone (TAZ), as defined by the poet and anarchist cultural theorist Hakim Bey, is more than just a distinct space; it is a space in control of itself, in that it does not recognise outside authority.

Bey suggests that a festival or event has the potential to act as a moment of intense uprising and creative disruption, which allows for the creation of a TAZ, a guerrilla moment of positive revolutionary acts and art. In our present period of geopolitical and economic uncertainty, mass movements of people across territories are coinciding with the beginnings of exclusionary zones in Europe. It is in this context that this year’s ISSTA festival seeks to create a series of Temporary Autonomous Zones–new unmapped and self-determining sonic, conceptual and social spaces–which assert, for a time, their independence from existing structures through discussions of creative and technological practices and research, and through the artistic works themselves.

The sixth annual Irish Sound, Science and Technology Festival and Conference (ISSTA 2016) will be held September 7th-9th 2016 at Ulster University, Derry/Londonderry and partner venues throughout the city.

(detailed schedule in the conference booklet) 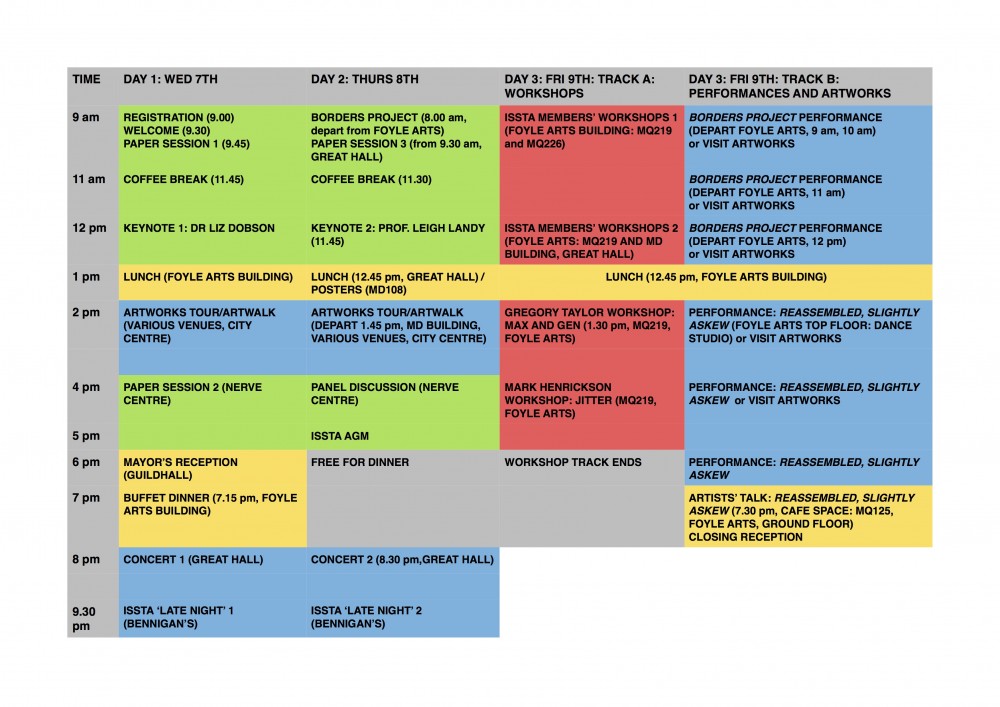 Please note that membership  and registration is required for all presenters.
This price includes access to our full range of events, including workshops, a conference buffet and social events.

For all other attendees: membership is optional, you can opt for the member or non-member registration.

We have reserved self-catering campus accommodation (en-suite rooms) for attendees at a discounted rate (£28.80 per night) for Tuesday 6th to Friday 9th September. For further details, booking links and discount code here. (Please make sure you quote the discount code.)

ARRIVING IN NORTHERN IRELAND AND DERRY/LONDONDERRY

Derry/Londonderry is the second-largest city in Northern Ireland and is situated in the northwest of the region, near the border with Co. Donegal in the Republic of Ireland. The city is a great base for those wishing to explore the scenic areas of Donegal to the north and west and Northern Ireland’s famous north coast, including the Giant’s Causeway.

The city is accessible from Belfast via the A6, from the West of Ireland via the N15/N13 and from Dublin and the East via the M1/N2/A5. Those travelling from Limerick can take routes via the West (e.g. N17), with those coming from Cork advised to travel via Dublin.

The closest regional airport is City of Derry Airport (11 km from Derry/Londonderry), with connections including Liverpool, London Stansted and Glasgow Prestwick.

The closest international airport is Belfast International (22 km outside Belfast city) . This airport is served by the Airporter bus service to Derry/Londonderry, in addition to bus services connecting with Belfast Europa Buscentre, the main inter-city bus station in Belfast. Belfast City (George Best) Airport has a large number of European connections.

NB: if booking the Airporter service, you can obtain a 20% discount by quoting the (memorable) discount code ISSTA16.

Dublin Airport (10 km north of Dublin city Centre) is the largest international airport on the island of Ireland and has direct bus services to Derry/Londonderry (see further details under bus services, below).

GALWAY AND THE WEST TO DERRY/LONDONDERRY

ARRIVING BY TRAIN FROM DUBLIN CITY

It is possible, though somewhat expensive, to travel to Derry/Londonderry from Dublin by train.

Journey time is variable, as it sometimes involves a long connection at Belfast Central; the journey takes longer than the counterpart bus journey. Use the Translink Journey planner to calculate journey times.

Magee campus is within walking distance of the city centre (10–15 mins to the main campus areas; c.20 mins total to the campus accommodation). There are a number of local bus services, but these are not particularly frequent and stop early in the evening.

Taxi fares are inexpensive (c. £3.50-4.50 for local journeys); further details of taxi companies will be circulated in advance.

Our other venues are all within the city centre area of Derry/Londonderry; a complete map of venues will be made available.

If you are from outside the European Union, you may require a letter of invitation for visa purposes; please contact the conference chair, Brian Bridges, vice-president@issta.ie. Please also note that you may need visas for both the Republic of Ireland and UK, depending on your itinerary (i.e. if you arrive, or wish to travel through, the Republic of Ireland).

A full list of our reviewers are listed in the conference booklet.

Partners and supporters include: