Inaugural [HE]Arts of STEM conference and festival, Feb 24th and 26th, Belfast and Derry/Londonderry, in association with NI Science Festival and FabLab NI 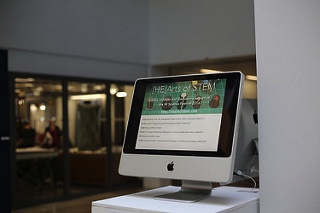 ISSTA recently took part in the [HE]Arts of STEM (Higher Education Arts of STEM) conference and festival at Ulster University in Belfast and Derry, which included creative works from ISSTA members and a number of guest lectures on topics such as spatial sound, sound and memory, architectural acoustics and the maker movement.

This event provided an opportunity to promote ISSTA as part of the NI Science Festival. We also had the chance to work with our partners for ISSTA 2016, FabLab NI.

Further details of the event can be found here: https://heartsofstem.wordpress.com/

The event was favourably received and Ulster University is planning on developing this into an ongoing series. ISSTA members who are interested in getting involved with future events or who have ideas (creative works, academic presentations, workshops, etc.) can contact Brian Bridges at vice-president@issta.ie.